A sustainable web: What does that actually mean?

At Acceptable Ads, we write a lot about our vision for the future of the web. It’s something that lies near and dear to us. Our raison d’etre, if you will. Because everything we do is based on the concept that the web should be sustainable, and that it functions like an environment or ecosystem. It’s where various interests come into play, but where solutions exist that actually help everyone.

The independent Acceptable Ads Committee (AAC) operates under a similar premise: that there are multiple entities that make up the online world, and they all should have a say. That’s why the AAC is split into various representative groups who come to the table to discuss what works with online advertising and user rights and preferences.

Here’s a nifty picture that depicts that a bit better: 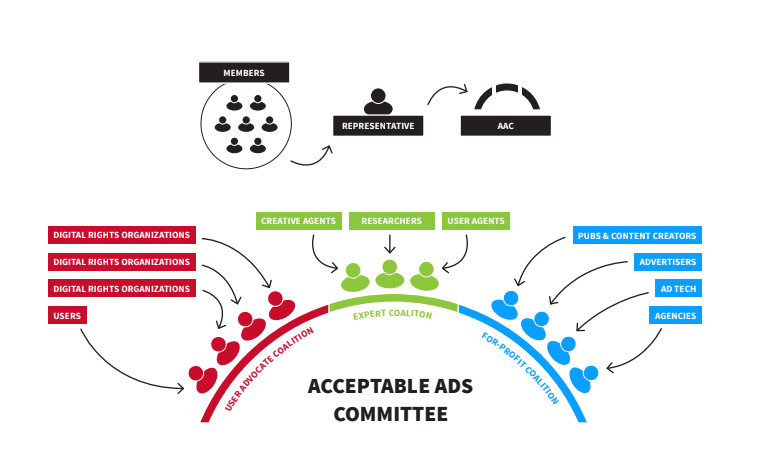 The combined effect is that everything we work on and the organizations we work with at Acceptable Ads (that including the independent AAC) are based on the idea that one cannot navigate the modern terrain of online advertising and user interests without looking at how it all holds together.  how a give-and-take from all sides leads to a sustainable future.

That means that these users see lighter versions of approved ads that have been adapted to the Acceptable Ads standard, which is an ad criteria standard that the Acceptable Ads Committee (with its varied representation) have agreed upon as being fair and nonintrusive.

Publishers (and many at that) have seen the promise of working with the Acceptable Ads standard: There are approximately 13,000 plus websites benefiting from Acceptable Ads.

These publishers have entered into a fair exchange of values with users, providing them with less-intrusive ad content that the users are then allowing their ad blockers to show. This is called ‘ad filtering’, where not everything is blocked, only the types of ads that are deemed intrusive and annoying to the user experience.

That also means that advertisers who work with Acceptable Ads can easily get their content looked at and adjusted to the standards by one of the many solution providers, like AAX, Blockthrough or Taboola, and thus those ads not only reach Acceptable Ads users (there are 250 million worldwide and growing), but they also build user confidence and positive brand recognition by not being distracting or aggressive.

In the end, that gives us an environment where everyone is agreeing to a system that allows the parties in that system what they want. Users have a better online experience. Publishers are able to monetize their content. And Advertisers are able to use their inventory in a way that reaches users who have lower ad exposure.

This is exactly what a sustainable online future looks like. Join us and be a part of it today.